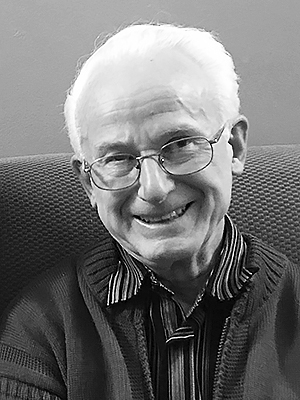 84, of Lunenburg County, Nova Scotia, passed away due to complications from pneumonia on June 1, 2020 at South Shore Regional Hospital. His family is grateful for the excellent care he received there and forever thankful that he was able to have his brother and a close friend by his side during his final days. Born in Sydney, Nova Scotia, Roger was the third and youngest child of the late C. Roy and Greta Mason. He was predeceased by his sister Carol, and his wife, Margaret. Roger grew up in Sydney, working after school and over holidays at Mason's Ltd., his family's wholesale produce store. He attended Horton Academy at Acadia before going to Mount Allison University, graduating with a Bachelor of Commerce at the age of 19. Roger's life was guided by the notion that one should live simply so that others can simply live. He was independent, self-sufficient, frugal and generous. His fascination with investment taught him that a penny saved was not just a penny earned but also a penny that could be invested, multiplied and put to service in bettering the world. He bought his first shares in his father's furniture store at the age of 10. A few years later, Roger discovered what would become a life long-passion for philanthropy when he donated money to buy blankets for families in Britain where wartime rationing was still in effect. Over the course of his life, he supported churches, transition houses, disability service organizations, and educational institutions. When he learned that a particularly bright classmate of one of his children wouldn't be able to attend college, he found a way, anonymously, to create a fund that would put them through university. Friends in need knew they could come to him for help. Over the summer following his graduation Roger acquired a taste for travel and adventure when he and his roommate hitchhiked across Canada, ending up in BC where he first worked for BC Ferries on the Seattle run and later in Kitimat. He returned to Sydney in the fall to work in his family's businesses but within five years was on the road again headed to the west coast. En route, he took a job in Winnipeg where he stayed for several years and met and married Margaret Myron. Roger and Margaret shared a passion for travel and an ability to live happily on a shoestring budget. After six months of working, saving and exploring in California, they set out in the fall of 1965 on a six-month hostelling and camping adventure through Japan, Taiwan, Hong Kong, Cambodia, Thailand, Malaysia, Australia, New Zealand and Fiji. Another camping trip across the USA eventually brought them to Nova Scotia in 1966. They settled first in Halifax and then Truro where they raised their three children. Subsequent adventures took them to England, France, Germany, Austria, Switzerland, Indonesia, China, Greece, Alaska and Costa Rica. Roger spent the majority of his professional life working for and eventually managing the Nova Scotia Dairy Commission, retiring in 1989. His job required him to travel extensively to farms within the province as well as nationally to attend meetings for the Canadian Dairy Commission, the Canadian Milk Supply Management Committee, the Dairy Farmers of Canada and internationally for meetings of the International Association of Milk Control Agencies. In his off-work hours, he did all of his own home maintenance and landscaping, tended his extensive vegetable garden and took his family camping, cross country skiing and orienteering. He also pursued his passion for genealogy, clipping obituaries and tracking down elderly relations whom he would visit and interview. Margaret and Roger retired in 1995 to Lunenburg County where the Masons had first settled in the 1750s. Roger was able to devote many hours to genealogical research in the archives, in the community and local cemeteries. With his brother, he explored the islands and coastline of the county, investigating old foundations and footpaths. He was active for many years in the congregations of both Holy Trinity in Bridgewater and St. John's Lunenburg where he was involved with the restoration of the church after the fire in 2001, and then with the Salvation Army. In later years, he found community at the local music jams where he was endlessly delighted to find he was seated next to distant cousins. In the years since Margaret's death, he focused his attention on promoting skills and independence for local women by endowing a scholarship at the Nova Scotia Community College in Margaret's memory. In lieu of flowers, the family asks that you consider making a donation to the Community Legacy of Hope Award: https://support.nscc.ca/Mason Roger is survived by his brother, Ralph (Diane Fox), Bridgewater; daughter, Hilary (Joy Dixon), Vancouver; sons, Peter (Anita Andriani), Ottawa, and Eric (Nancy Dobson), Dartmouth; and grandchildren, Joshua and Finn. They will remember him for his openness, his occasional orneriness, and the constant twinkle of subversive fun. Burial arrangements have been entrusted to the Dana L. Sweeny Funeral Home, 11213 Highway 3, Lunenburg. A family memorial service for Roger will be held at a later date with interment in Hillcrest Cemetery, Lunenburg in a family plot shared with his wife, Margaret who died in 2016, and his great grandfather Ephraim, and Ephraim's two eldest children Anne and Simon who all died within weeks of each other from typhoid in November 1888: a fitting resting place for the man and his memory. www.sweenyfuneralhome.ca