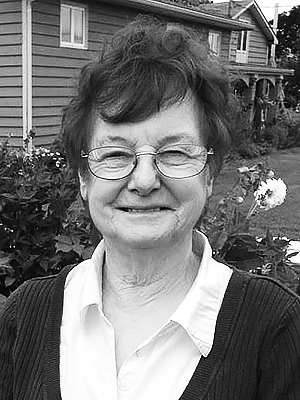 It is with profound sadness we announce the passing of our mother suddenly early on June 6, 2020 at the South Shore Regional Hospital. Due to the hospital restrictions of only two family members permitted in her room, her two oldest sons, Doug and Darrell, who had become her constant companions, were at her bedside while her youngest son, Greg, and daughter, Pam were unable to be there in person but were in spirit. She is also survived by their family and three grandchildren and a great granddaughter as well as many nieces and nephews. She was born in Halifax and was the daughter of the late Herbert G. And Lillian F. (Reid) Doubleday. She was the youngest of four brothers and three sisters and was the last living sibling of the family. She was also predeceased by her husband Arnold who passed away in 2009. She missed him greatly and thought of him every day. Her working career began with training at the Camp Hill Hospital School for Nursing before going on to work at the Lunenburg Fisherman’s Hospital, Harbour View Haven, Home Care Nursing, and finally 17 years at the Lahave Manor. She did some volunteer work after that. She tried her hand at many hobbies such as painting, tole painting, quilting and stitching. Her favourites though were to curl up with a good book, gardening, going on vacation trips, shopping trips and visiting garden centres. She loved life and meeting and talking to people. She could start a conversation with anyone. Thus, it became a real blow when in 2017 a battle with ovarian cancer and chemo left her unable to walk and dependent on others to go anywhere. She liked her independence to jump in her car and go anywhere or go visit people. Her prognosis was her life was measured in weeks but she beat that off. It was not the first time she battled from tough situations, surviving a heart situation and operation in 1996, leukemia in 2000 which she beat, and spells with anxiety she had to control. In the last years we would take her wherever she wanted to go which she looked forward to. She visited a garden centre just three days before her health took a quick demise. She is sadly missed. We wish to thank on her behalf the nurses, doctors, Home Care, VON and any others who cared for her. Cremation has taken place and no service is planned at this time due to the pandemic situation. Any donations may be made to two of her favourite charities, the SHAID Tree Animal Shelter and the Dawson Daisy Hospital Foundation. www.sweenyfuneralhome.ca