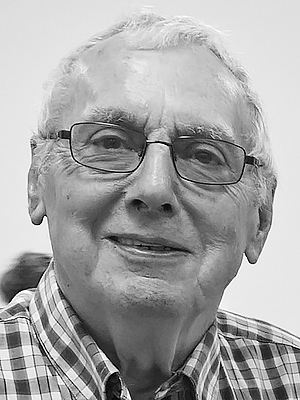 It is with great sadness that the family of Norman Henry Herritt, 86 of East LaHave announces his passing on Saturday, April 30, 2022, at the South Shore Regional Hospital, Bridgewater, NS.

Born in Petites, NL on September 9, 1935, Norman was the son of the late John and Mildred (Mauger) Herritt.

In his childhood Norman was a choirboy at the Anglican Parish of Rose Blanche, NL (a High Church at the time), before his family moved to Louisburg, NS. During this period of his life Norman started his working career in the Louisburg fish plant, including spending time on the trawlers, and even spending time being a pipefitter in the plumbing trade at the American Air Force base in Stephenville, NL, before studying Industrial Management at Dalhousie University. Norman, after relocating his family to Halifax, NS, was then hired by Atlantic Fish Processors to manage the fish plant in Marystown, NL. In the early seventies, he was hired by H. B. Nickerson’s to manage the fish plant in Georgetown, PE, before being transferred to Riverport, NS until the plant burned down in 1981. H. B. Nickerson’s would then send him to Triton, NL shortly after the fire, to manage Triton Seafoods until National Sea would come calling a few years later. Norman was hired to manage the fish plant Burgeo, NL, and in 1987 National Sea would transfer him to Canso, NS eventually being sent to close the fish plant in St. John’s, NL during the downturn in the fishery.

By 1990, still working for National Sea Products, this time in Lunenburg, NS where he was made a Procuring Officer which allowed him to travel to places such as Kodiak, AK, Pangnirtung, NU, and overseas to Thailand, Iceland, and Norway. Norman retired at 60 in 1994 and having built a family store in East LaHave in 1990, he now occupied his time operating the store with his wife Vivian until they sold the business in 2001.

Over the years Norman had a love of music, a passion for writing poetry, and being an avid songwriter, writing various songs for local musical performers such as Norm and the Boys and Clayton Meade out of NL and Heather Crossland from Lunenburg County.

Funeral arrangements were under the direction of the Dana L. Sweeny Funeral Home, 11213 Highway 3, Lunenburg, NS; where funeral services to celebrate Norman’s life were held on Friday May 6. Interment was in St. Matthew’s Cemetery Upper LaHave, NS.

In lieu of flowers memorial donations may be made to Health Services Foundation of the South Shore. www.sweenyfuneralhome.ca