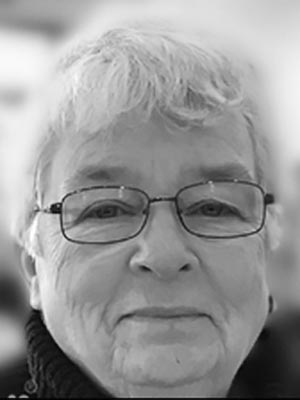 It is with heavy hearts that the family of Barbara Anne (Walker) Girling, 75, of Wileville NS, announces her passing on Monday, December 26, 2022, at Harbour View Haven nursing home, Lunenburg, Nova Scotia.

Barb was born in Brantford, ON on January 13, 1947, to Harley and Dorothy (Palmeter) Walker. Barb spent her early years in Ontario, then, at age 10, the family moved back to Milton, Queens County, on Nova Scotia's South Shore, where her family has lived since the 1700s.

Her adolescent and early adult years were spent in NS. During that time she had many friends from school, Girl Guides, and a local youth group. She enjoyed playing badminton locally. While in high school in Liverpool NS, she was most proud to have achieved second place in a Provincial Mathematics competition.

In 1963 Barb moved away from home to go to Acadia University in Wolfville, NS where she earned a BSc with a Maths major and graduated in 1967. She was snapped up by IBM right out of university and worked in their Montreal office using her various computer language skills at a time when computers filled entire rooms. Barb later completed a BEd from the University of Toronto.

During her time at Acadia, Barb enjoyed extracurricular activities in theatre arts and playing card games at the SUB. During her third year she met Brian, the love of her life, and they married in Milton in 1968. During their 54 years of marriage, Barb and Brian lived in Calgary, Toronto, Unionville ON, Newmarket ON, and Kitchener ON, before retiring in 2011 to Miramichi NB. They also travelled in Europe, New Zealand and throughout Canada. In 2019 they returned to Nova Scotia, living in Wileville.

It was in 1981 that they welcomed their only child, Adrienne, of whom Barb was most proud, following her accomplishments while in Canada and in New Zealand. Adrienne and her partner Stephanie relocated to Halifax from Wellington NZ in July 2022.

She was predeceased by her brother Gerry Walker of Western Head NS, father Harley and mother Dorothy Walker of Milton NS.

The family would like to acknowledge the support of the Alzheimer's Society of NB and NS, the dedicated staff of Lunenburg County Home Support, South Shore Regional Hospital, and Harbour View Haven Long Term Care home.

Cremation has taken place under the direction of Eirene Cremations Inc. of Bedford NS. A celebration of Barb's life will be held on Sunday, April 30, 2023. If you are attending, please RSVP at tinyurl.com/Attend-Apr-30.

Please consider donating to your local branch of the Alzheimer's Society, whose funding comes solely from donations.