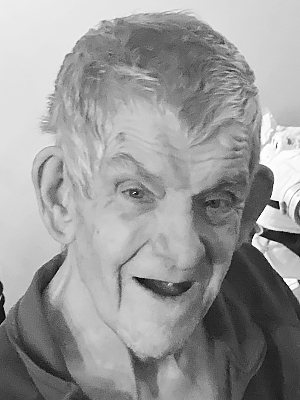 Carmie, (Carmon Victor Conrad) - 77 of Lloydminster, AB, passed away on April 8, 2022, in Royal University Hospital, Saskatoon. Carmie was born in Bridgewater, NS to Lawrence and Verna Conrad (Knox), on August 4, 1944.

Although he had limited mental capacity, he made up for it with his sense of humour and love he gave to his family, especially to his niece Belinda and her husband John, to Jeff and other friends. He loved watching TV, movies, hockey games - where he would pretend to blow the ref's whistle, burger commercials - there he’d rub his belly and smack his lips. His sense of humour was through the roof.

He’s going to leave a huge hole in our hearts and lives.

Carmie is survived by his sister Gloria Mailman of Bridgewater, NS; nieces Belinda of Lloydminster, AB; Patti of Bridgewater, NS; Gail of Maitland, NS; Michelle of West Northfield, NS; and nephews Dwayne of Grand Bend, ON; Gregory of Hebbville, NS; and numerous other nieces, nephews and friends.

He is predeceased by his parents, Lawrence and Verna Conrad, and sisters Alice, Audrey, Joyce, and brothers Roderick, Granville, Rayburn and Glendon.

Carmie will be cremated and his ashes shall be returned to Nova Scotia where he’ll be buried with his parents at Brookside Cemetery, Bridgewater, NS at a later date.