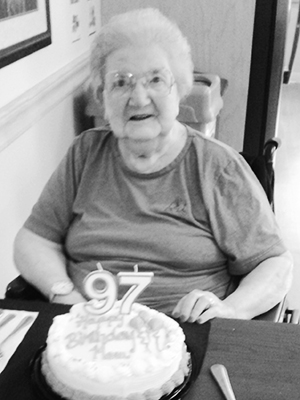 It is with great sadness that the family of Daisy Pauline Hume, 97, of Garden Lots and formerly of Blue Rocks and Toronto announces her passing on Thursday January 5, 2023, at Ryan Hall Nursing Home, Bridgewater.

Born in Blue Rocks on August 12, 1925. Daisy was the daughter of the late Thomas and Ada (Corkum) Romkey.

Daisy attended most of the elementary grades at the school in Blue Rocks before staying at home to help her mother. Her parents had been very fond of Daisy Burke who taught at the school. They decided to name their first daughter after her. Daisy was so proud of a doll, known as The Eatons Beauty, that her parents had given her for Xmas but was used as their tree top and then put away for the year.

Daisy was a very active member of St. Paul's United Church as a teenager. She loved to listen to her brother Gerald play the organ and sing Wilf Carter songs at home. Daisy enjoyed visiting and the great meals at her grandparents, Anna and Gabriel Corkum, and extended families on Big and Little Eastern Point Islands with her uncle Billy Corkum serving as the taxi. That included the big outdoor summer picnic held at her uncle Bill and aunt Martha Masons property. The meals and constant friends and family visits at home were cherished memories as well. A few of her close friends were Marjorie Knickle, Phyllis Frittenburg, Irene Wagner, and Kathleen Corkum. After picking blueberries on the Commons with her sister Vivian, Dorothy Tanner and Theresa Mullins, they would clean them at home and then walk them to town on the old road to sell for 25 cents a quart. Listening to Hank Snow play and sing on the big rock in front of Percy Tanners store in Blue Rocks before he left to become a star was another great memory.

Daisy loved a lot of the early country music. One of the places that she worked was for an American family by the name of Grove in Chester. Around that time, she helped her aunt Jessie and uncle Clifford Cook in East River after their son Kenneth was born.

Fate brought her and Gordon Hume from East Chester together at the East River Hall to a dance. They were married in Blue Rocks at St. Pauls United Church on October 10, 1951. Their next move was to Toronto to start a new life where they lived at numerous locations including Don Mills.

Their son Donald was born about this time in 1956. Daisy was employed as a chassis assembler for Philco TV and received her drivers license in Agincourt. After buying a house in Scarborough in 1962 Gordon became ill and passed away from a kidney infection in early Spring of 1963.

Daisy and Donald moved back to Blue Rocks to live with her mother. She received employment with National Sea Products as a production worker with the help of her brother Harold. An apartment on one side of Helen and Murray Knickles' house in Blue Rocks became available when her sister Kathryn and Mackie Knickle moved out in 1965. Daisy was so proud of her new apartment and the new 1966 beige Dodge Valiant that she bought at the Lunenburg Foundry Dodge dealership.

Shopping, eating out and visiting friends and relatives became the norm when she wasn't working and putting in a lot of overtime. She and Donald spent a lot of time visiting in East Chester with her mother-in-law, Ella Hume, and extended family there and in Timberlea. In 1986 Daisy and her son and family bought a house in Garden Lots where she had her own basement apartment. Retirement from National Sea Products became a reality in 1990 which gave her more time with her grandchildren Erin and Amy. Playing Rummy, Scrabble, television programs like The Young and The Restless, The Waltons, The Price is Right, and family movies were some of her favorites to watch and play. Greeks’ Lunenburg pudding and sausage, a cup of Red Rose Tea and a cold Labatt Blue were staples. She continued to enjoy her plane and train trips to Ontario in the summer and fall to visit with her good friends Warren and Evy Moland in Goderich and her sister Vivian Gibson and family in Dundas and Hamilton.

Due to failing health, she moved to Ryan Hall Nursing Home in Bridgewater in January 2015. Daisy felt very fortunate to have lived long enough to spend time with her great-grandchildren.

She was predeceased by her brothers Gerald, Freddy, Harold, and her sister Jessie Morash.

We pray she is in heaven sharing her good nature, love and laughter with her husband, family and friends! She will be missed!

Daisys' family would like to thank Dr. Catherine Kelly and the staff at Pelham Medical, Lunenburg, the staff of Lunenburg County Home Support, Dr. Barrington and the staff at Ryan Hall, and Darlene Meagher and the late Arlene Smeltzer from Helping Hands, which was started by Ted Hobson of Maders Cove, for all the care, compassion, and weekly visits over the many years.

Funeral arrangements are under the direction of Davis Funeral Home, Chester. A graveside service will be held at St. Stephens Anglican Church cemetery, via King Street, Chester on May 13 at 2 p.m. The Reverend Ian Wissler officiating. Reception to follow at The Royal Canadian Legion, 14 Union St., Chester.