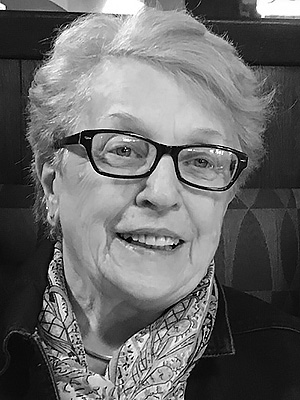 It is with great sadness that the family of Gloria Jean Turner, 80, of Lunenburg announces her passing on Tuesday, December 20, 2022, at Rosedale Home for Special Care, New Germany. Born in Glace Bay on June 14, 1942, she was the daughter of Edith (Woodburn) Tobin Black Taylor of Lunenburg and the late Mark Tobin, Thomas Black and Harris Taylor.

Gloria attended the Lunenburg Academy and Queen Elizabeth High School in Halifax, and then graduated from the Miss Murphy’s Business College. Gloria started her career in Ottawa with the federal government, and moved back to Lunenburg in 1972. She worked at ABCO in Mahone Bay and then enjoyed 21 years as detachment clerk with the RCMP in Lunenburg until her retirement.

Gloria was a devoted volunteer; Past Matron and member of the Order of Eastern Star; Grand Adah and District Deputy Grand Matron in the Grand Chapter; member of the Daughters of the Nile of Philae Temple, and was also a member of Central United Church, Lunenburg.

In her early years she was an avid baker, baking cookies, especially Christmas cookies which everyone loved the jam shortbread, and bread. She also loved to shop and caught onto the internet and Amazon quickly. Gloria always had a craft on the go, doing ceramics in the 70s, Lopi sweaters in the 80s and then became an avid quilter, making many beautiful quilts over the years with her mother.

Gloria was predeceased by her father, Mark Tobin, and son, Jamie Almeda.

Funeral arrangements are under the direction of the Dana L. Sweeny Funeral Home, 11213 Highway 3, Lunenburg, where a memorial service to celebrate Gloria’s life will be held at a later date.

There’s no love like a Mothers’ love as the unconditional love a mother provides comforts us no matter the age.  Until we meet again, her love will be sadly missed.

In lieu of flowers memorial donations may be made to the ESTARL (Eastern Star Training Awards for Religious Leadership) or to the Canadian Mental Health Association, Nova Scotia Division. www.sweenyfuneralhome.ca