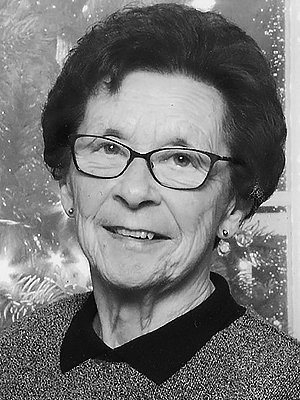 Aged 82, passed away peacefully at Harbour View Haven, Lunenburg on November 19, 2020 in the presence of her younger sister, Gloria. The two were often confused for each other by casual acquaintances and friends alike when approached on the street, at the shopping mall or at a social gathering. Originally from West Northfield, the middle daughter of Lloyd and Phyillis Meisner, Audrey lived most of her life in Dayspring with her late husband, William (Billy) Bolivar and their three children. Her friends would often see her sitting beside the picture window in the living room as she drank her morning coffee and did the crossword, as they rounded the bend by the Quickmart. During the summer, Audrey could usually be found at her camper at Risser’s Beach, her favorite place in the world, where she was a welcome fixture for decades. Active in her community, Audrey volunteered with the Bridgewater Baptist Church, Dayspring and District Fire Hall and the Interchurch Food Bank, among other organizations. Audrey also served for many years on the Lunenburg District School Board. All this while maintaining the books for the family construction business and making her house a home for her family. Audrey is pre-deceased by her older sister, Shirley; her husband, Billy, the love of her life. In addition to her younger sister, Audrey is survived by her children, Dawn, Anne and Bryan (Patricia); grandchildren, Parker (Katie), Brittney (Dave), Fraser, Faith, Jasmine; great-grandchildren, Nick, Nash, Jane, Jack as well as many nieces and nephews; more cousins than you can shake a stick at; and her two dearest girlfriends, Carol and Margret-Anne. Those close to Audrey knew the struggles she faced in her final years. Her declining mind took her away from all of us over time as she became a shadow of herself. But that is over now, she is at peace and we can remember her for the hard working, fun-loving, quick-witted, bright, funny, caring, companionate person that she truly was at heart. She will be missed by many. Funeral arrangements are under the care and direction of Sweeny’s Funeral Home, 35 York Street, Bridgewater. The family will determine in the future at which point she will be interned beside Billy at the Dayspring Cemetery. In leu of flowers, donations can be made do the Alzheimer Society of Nova Scotia. On-line condolences may be made by visiting www.sweenysfuneralhome.com