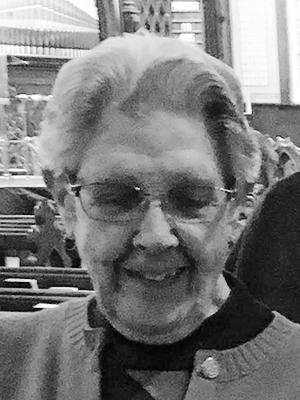 In loving memory of Marian Alberta Cyr, who passed away peacefully in her home on April 6, 2022, at the age of 87 years.

Marian was born in Lunenburg NS on July 5, 1934, the daughter to the late Gilbert and Ruth Zinck. She spent her early years living with her parents in Garden Lots and Lunenburg. She attended the Lunenburg Academy, which gave her many of her fondest memories, and graduated from grade 12 in 1952. That year she moved with her parents and younger sister to Pictou NS, where she completed her education by attending Pictou Academy, completing a business course. It was in Pictou where she met her soon-to-be husband, Alex Cyr. Marian was married to Alex in October 1956, and they moved to Dartmouth to begin raising a family. Two sons: Bryan, and Christopher were born, and the family continued to live in the Dartmouth area for another 12 years. In 1973 the family moved to Marian’s beloved Lunenburg where they remained until 1979 when they relocated to Fauxburg, Lunenburg County, where they continued to live until Marian’s passing.

Music was an important part of Marian's life. She took piano lessons for many years in Lunenburg and enjoyed listening to all genres of music from Nana Mouskouri to the Platters. Marian and Alex enjoyed dancing and attended many dances in their younger years. They were often seen chaperoning dances when their youngest son was in high school. Yes, Marian was one of the cool parents. Marian attended many of the musical concerts in her hometown of Lunenburg and very much enjoyed playing her Hammond Organ into her retirement years.

Marian was an avid reader and took a particular interest in the seagoing history of her family, and the history of the Town of Lunenburg. Marian always had a novel on the go and was a great source of pocket novels for many of her friends.

Marian was always an outgoing person who enjoyed a good laugh. She could find the humour in most every situation, good or bad. Marian was a very social person and always enjoyed a good party whether it be the Newfoundland Dog Fun Days, a group of boater friends moored off the family cottage, which she always called the “camp”, or the numerous other planned or impromptu get togethers which happened there.

Marian enjoyed sports and was an excellent basketball player in high school. She also bowled with her husband in their early years together. The sport which she really found a passion for later in life was curling. In the 70s and 80s Marian had great success as a curler winning the Western Counties Ladies Curling Championship as Skip, and the inhouse Mixed Curling Championship as Mate. In 1982 Marion achieved her Level 1 Certification for coaching and volunteered as coach for the Junior Curling Program in Lunenburg over the course of several years.

Marian worked for the Fisheries Museum of the Atlantic in Admissions which she really had a passion for. Marion would do exhaustive research about the area and tourist destinations so that she could give them the best information possible about her beloved community. In 1988 she was named as a Tourism Ambassador by the Government of Canada for her outstanding work in the promotion of the community.

Marian was always ready to lend a hand when help was needed. She was an ardent supporter of her community as is evidenced by the many organizations she supported throughout her life. The following are the organizations which she supported and volunteered her time for: Fisherman’s Memorial Hospital Gift Shop, Lunenburg Academy Foundation, Lunenburg School Board, Once Upon a Lunenburg Christmas, Lunenburg Curling Club, Lunenburg Craft Festival, West Heckman’s Island Road Association, Newfoundland Dog Club Nova Scotia Chapter.

The family would like to thank all those who reached out at this sad time. Marian will be deeply missed by those who knew and loved her.

A private family and friend internment will take place at Hillcrest Cemetery Lunenburg at a later date.

In lieu of flowers memorial donations may be made to the Lunenburg Academy Foundation., St. John’s Anglican Church, Harbour View Haven Home for Special Care or to a charity of your choice. www.sweenyfuneralhome.ca