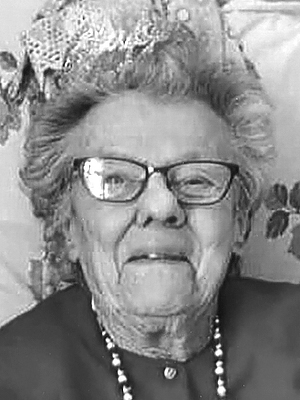 It is with heavy hearts we announce the passing of our dear mother, grandmother and friend, Mary "Pearl" (McRae) Lohnes, on December 21, 2022, at the age of 97 at Ryan Hall, Bridgewater, where she happily resided for the last seven years.

Born in Tignish, PEI, on March 10, 1925, she was the daughter of the late James McKnight McRae and Mary Ann (DesRoches) McRae.

She was predeceased by husband Baron Lohnes, and her nine brothers.

Mom was a devoted housewife and mother, as well as a wonderful cook, quilter, and knitter.

She was one of the first original founding members of The United Communities Fire Dept. Ladies' Auxiliary (1973), where she devoted many volunteer hours. Once her family was grown and moved out, she worked several years for R.E. Newell Fisheries Fish plant. Her passion for playing Bingo and cards stayed with her to almost the end.