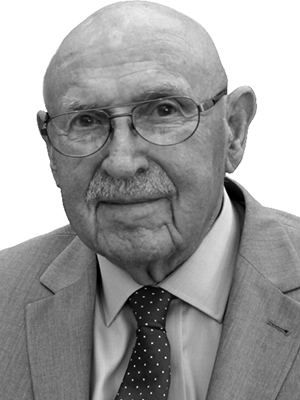 Ozzie was born in 1928 in Summerside, PEI; the son of Heber and Florence (Crockett) Hardy. He was predeceased by his sisters Olive Atkinson (Earle) and Velda Wells (Walter). He grew up working with his father on the family farm in Elmsdale, near Alberton. In his youth, he adventured throughout the countryside - on foot, bicycle, and horseback as well as by wagon, truck, and train - prior to attending Summerside Academy and Mount Allison University, where he met Mollie, the love of his life. While teaching for two years at the Lockeport Regional High School he was asked to lead the Air Cadet Squadron; this led to him joining the Royal Canadian Air Force in 1954.

Ozzie went on to enjoy a long and successful career in the logistics division of the Canadian military. It began with postings in Moncton, Ottawa, and Ohio where he completed a Master of Science in Logistics Management at the Air University in Dayton. In addition to completing a US Army course in Logistics Management, he also studied at National Defence College in Kingston. Further postings in Halifax and Ottawa culminated in promotion to Brigadier General and a three-year stint at HQ AFCENT, a NATO base in the Netherlands, completing his 30 years of service then returning to Canada. Ozzie and Mollie chose to settle down in Indian Point, near Mahone Bay, NS. Their home was a place for many wonderful family gatherings over the years; they loved it there as much as anywhere visited on their extensive world travels. Upon retirement from the military, he worked at IMP Group in Halifax for several years as the Director of Materiel.

As a father to six children who participated in the family’s frequent military moves, he eagerly taught his offspring how to pack a vehicle for maximum efficiency. He also patiently shared his knowledge about pitching tents, poaching eggs, laying a proper fire, and building model airplanes. His children fondly recall time spent with their dad enjoying bumpy wheelbarrow rides, camping, playing catch, sailing on the Ottawa River, and cruising the waters of Mahone Bay - often to picnic on Spectacle Island - in their Cape Island boat. Other treasured family pastimes included watching Hockey Night in Canada and skating, typically on the Rideau Canal in Ottawa or on one of Ozzie’s superbly maintained backyard rinks.

A keen hockey player, reader, golfer and cyclist, Ozzie was also a lover of cribbage, crokinole, carefully tended lawns, peanuts in the shell, classical music, ice cream and fine automobiles. Upon his retirement, he found great satisfaction establishing Hardy Woodcraft, specializing in wood turning to create beautiful objects out of burled wood. His works found their way into galleries and craft shops across Canada as well as the homes of family members and private collectors.

The perpetual twinkle in his eyes and his love of stories well-told will be missed at future ‘Hardy Parties’. A celebration of Ozzie’s life will be held at a later date. Memories or messages of condolence can be sent to the family at rememberingozhardy@gmail.com. In lieu of donations, the family requests that you consider an act of kindness towards someone, in his honour. For those who wish, in memorium donations to the Mahone Islands Conservation Association would be appreciated.