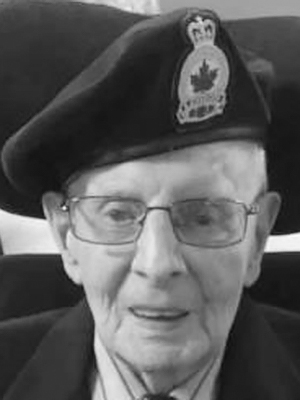 It is with great sadness that the family of Medley Albert MacBeth, 96, of Lunenburg, NS, and formerly of Blockhouse, NS, announces his passing on February 4th, 2021 at the Veteran’s Unit of Fishermen's Memorial Hospital, Lunenburg NS. Born in Saint John, NB, he was the son of the late Selina Jane (Toole) and Medley Albert MacBeth Sr. In 1944, Medley, known to his military friends as “Chuck”, went overseas where he served in Italy and Holland before returning to Canada in 1946. Following the war, he re-enlisted in the Army and served at various locations both in Canada and Europe until his retirement in 1974 when he joined External Affairs and served at various international locations until 1988. It was in 1948 that he met Verbena, the love of his life and enjoyed 67 years of marriage before her passing. They continued to travel and wintered as Snowbirds in Florida for 25 years. Dad loved to read, listen to music and would sing at any opportunity. He was caring and loving with his family and friends. He will be dearly missed by all of us and will live on forever in our hearts. Medley was predeceased by his loving wife,Verbena in 2016. He will be greatly missed by daughters, DawnAnn (Ron) Hynes, Cobourg, ON; Jane (Jackie) MacBeth-Ernst, Blockhouse, NS; Cathy (Dave) Cowell, Wasaga Beach, ON; Cynthia MacBeth, Kingston, ON; grandchildren, Rick, Kenn, Marcel, Dan, Chantal, Greg, Crystal, Glenn, Jaime and Shayne; great-grandchildren, Tyler, Jesse, Taylor, Mikayla, Alyson, Olivier, Catherine, Hannah, Hailey, Hudson, Bryson, Josh, Phillip and Millie. He will also be missed, as well, by several nephews. Besides his parents, he was predeceased by his sister, Sylvia Fenn and grandson, Trevor Cowell. Funeral arrangements are under the direction of the Dana L. Sweeny Funeral Home, 11213 Highway 3, Lunenburg. In lieu of flowers, memorial donations in Medley’s memory to the Royal Canadian Legion, Poppy Fund, Branch # 23, Lunenburg, would be greatly appreciated. www.sweenyfuneralhome.ca