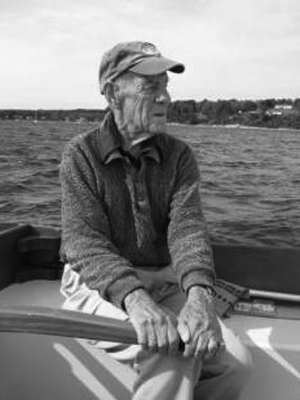 David J. C. Waterbury of Mahone Bay, formerly of Kentville and Chester Basin, passed away on March 12, 2021, in the Veteran's Unit of Fishermen's Memorial Hospital, Lunenburg. The previous week, at least 40 family members, from BC to MA, joined him virtually via Zoom to celebrate his 100th birthday. Dad was born in Halifax on March 2, 1921, to John Gladstone Waterbury and Hilda Cunningham. His mother died two weeks later, and he spent his first four years in the care of his maternal grandparents, Reverend Henry Ward and Mrs. Cunningham. Reverend Cunningham was the rector of St. George's Round Church in Halifax and was aboard the Minia during the recovery of bodies from the Titanic. In recognition of his participation, he received a deck chair retrieved from the Titanic, which Dad donated to the Museum of the Atlantic years ago.

When his father married Ella O’Donnell in 1925, Dad joined them in Wolfville, where he grew up and attended school. Ella, known as "Gram" by all, was a wonderful woman and the only mother he ever knew.

Dad served in the RCAF from June 1941 to August 1945. He was awarded the Distinguished Flying Cross for anti-submarine warfare and his actions saving his crew after being shot down in the North Atlantic. After the war, he completed the undergraduate degree he had started at Acadia University before enlisting. He took advantage of an entry program offered to veterans at some universities and graduated from Dalhousie Law School in 1949. He began his law practice in Kentville, where he was a well-known and respected community member. He had married Mary "Ruth" Pettigrew in 1944, and together they raised five children. A founding partner of Waterbury Newton, he retired in 1982. He then served as Chairman of the Nova Scotia Criminal Injuries Compensation Board, retiring in 1992.

Dad belonged to too many organizations and received too many awards to mention them all, from school and hospital boards to professional organizations and service clubs. While a member of one of the latter, he served as Past District Governor, Lions International. Dad was a 3rd Degree Craft Lodge Mason and a 33rd Degree Scottish Rite Mason. He served as Past Grand Master, Grand Lodge of Nova Scotia and, also, as Past Grand Patron, Grand Chapter of the Order of the Eastern Star of NS and PEI. Through these organizations, he and Ruth made widespread, life-long friendships. He was also a friend of Bill W. for over 44 years. One group of friends he missed the most since his hospitalization was the Tuesday morning coffee group that met at Eli’s Expresso in Mahone Bay.

A musician at heart and music lover, he played the organ at home, the saxophone in the Mahone Bay Legion band, and sang in the Trinity United Church choir.

A modest man, in his eyes, his many accomplishments and awards paled when compared to those of his family. Though not a man prone to public displays of affection, he took great interest and pride in the three generations to which he was the patriarch. He never interfered in their lives, but he was always there with advice if asked and help if needed.  His love of sailing was second only to his love of family. He served terms as commodore of both the Nova Scotia Schooner Association and the Royal Nova Scotia Yacht Squadron. He was at peace with himself and the world when he was on the water, a trait he passed on to his children.

He was a man of contradictions. He never raised his voice in anger but pretty much always got his way. He always had a project on the go that needed the arrival of an unsuspecting family member(s) to help him finish it. Patience was not one of his virtues, but he could spend hours playing cards, doing puzzles, or reading. As he aged, he took stubbornness to a whole new level. And then there was his life-long battle with golf, which, despite the frustration it caused him, he played into his 90s. We're sure there were some days he returned home with fewer clubs than he had when he left to play. Always a gentleman, he never forgot his manners.

He was predeceased by his wife of nearly 65 years, Mary "Ruth" Pettigrew, in 2009. That cloud did indeed have a silver lining in the person of AnnieMae Backman, a friend to both Mom and Dad through Eastern Star. They married in 2010 when Dad was 89. He and AnnieMae enjoyed almost eleven years of deep love and companionship that lasted until his life's end. We are all so thankful for the love and joy she brought to him and all of us. Also, for those she brought with her: her three children, Michelle, Andrew, and Edward, and their families. Without their love and her care, it is unlikely he would have reached his goal of celebrating his 100th birthday.

Left to mourn, but thankful to have been part of a life well-lived, are his wife, AnnieMae and her family; his children Joy (Larry Honey), Jack (Anne-Marie), and David (Jennifer), all of Kentville, Ron, Calgary, and Judith (Mark) Forbes, Lower Sackville; 14 grandchildren; 21 great-grandchildren; and a large extended family.

Cremation has taken place under the direction of White Family Funeral Home, Kentville. There will be no visitation. A celebration of his life by immediate family only will be held at Trinity United Church, Mahone Bay, followed by interment in Elm Grove Cemetery, Steam Mill. A video webcast of the service will be available at 11:00 a.m. on Thursday, March 18, 2021. Family flowers only. If so wished, donations in his memory to Trinity United Church, Mahone Bay, NS, would be welcomed. To view the video webcast and for on-line condolences or inquiries, please visit: www.whitefamilyfuneralhome.com.