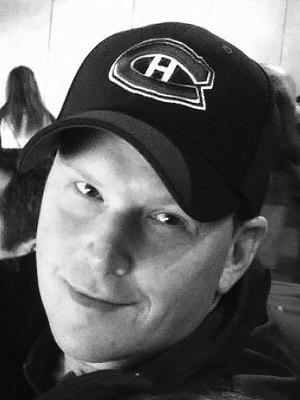 It is with great sadness that we announce the passing of our loving father, Christian Pelletier on May 7, 2020 at home, following his two-year battle with pancreatic cancer. Christian was born in Montreal, October 24, 1974 and moved to Hemford at the age of eight. His greatest joys in life were his two daughters, Josee and Hailee, whom he loved dearly. He was so proud to walk Josee down the aisle at her wedding in 2018 and thrilled to learn he was going to be a grandfather in the coming months. Christian also loved cheering Hailee on at the rink watching his favorite ringette goalie in nets. He was a devoted Montreal Canadiens fan and had the opportunity to take Hailee to Montreal last year to experience her first NHL game. Christian graduated from Nova Scotia Community College with a diploma in electronics engineering technology and started his career with VEMCO in 1998. He remained with the company throughout the years and was now employed by Innovasea, Bedford, the current owners. Christian was a respected and valued employee and was grateful for the support and compassion of his work colleagues throughout his illness. He had a love of camping with his family and spending time on the golf course, especially with his work friends. Christian is survived by his partner, Sandy Lohnes; and son, Merek, who he spent many hours driving to hockey practices and cheering on at games and tournaments; his devoted father, Roderick Veinot; daughters, Josee (Nick) Langille, Hailee and her mom, Nadine Smith; sisters, Joanne Pelletier and Helen (Pelletier) Bush; nephews, Francis, Alec; and niece, Jolianne. He was predeceased by his mother, Monique Guimond in 2012. Sincere thanks are extended to Sandy, VON nurses and the Palliative Care and Oncology teams at the VG Site who allowed Christian his wish to spend his final days at home. Heartfelt thanks to his very special friends, Andre and Howard, who have spent countless hours with Christian throughout his illness and have been a tremendous support to the family. Donations in Christian's memory can be made to Craig's Cause Pancreatic Cancer Society or Parkinson Canada. Cremation has taken place and a graveside memorial service will be held at a later date in Hemford.