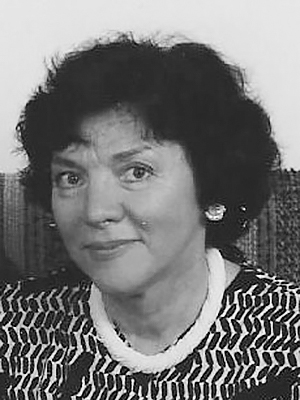 It is with sadness that the family of Barbara J. (Cooke) Simonds announce her peaceful passing at her beloved Fishermen’s Memorial Hospital in Lunenburg, NS on January 10, 2023.

Born in Ottawa on December 6, 1935, Barbara was the loving wife of the late John Simonds and daughter of the late Grace (Fraser) Cooke Needham and Leslie Cooke.

Following an interesting and fulfilling 28-year career as a member of the Cartography Department with National Defence and Geological Survey of Canada, Barbara relocated to Geneva Switzerland in 1980 in support of John’s career. And while life’s travels took Barbara to all corners of the globe, without hesitation, she would share that she was most at home in her adopted hometown of Lunenburg. As a CFA, Barbara was committed to her new community and gave freely of her time as she volunteered for over 30 years at Fishermen’s Memorial Hospital, St. John’s Anglican Church, Meals on Wheels, the Lunenburg Inter Church Foodbank, the VON Footcare Clinic, and other valued organizations where she made many wonderful friends and enjoyed a sense of community.

Having a lifelong love of sports, Barbara played League Basketball with the Government of Canda and in later years was an accomplished 10 pin bowler on the US Marine’s team in Geneva. For many years, Barbara was also a member of the Bluenose Golf Course where she served on numerous committees and enjoyed good fun and fellowship.

As a self-described private and reserved individual, Barbara had a keen interest in world affairs and her spiritual nature and acute social conscious informed her genuine concern for those less fortunate. Truly, Barbara was blessed to have called Lunenburg home since 1991 and was grateful to have lived her final years in such a wonderful community. She will undoubtably be missed and fondly remembered by many.

In addition to her husband and her parents, Barbara was predeceased by her stepson Fred, brother-in-law George Oliver and step-son-in-law Pat Moyle.

Funeral arrangements are under the direction of the Dana L. Sweeny Funeral Home, Lunenburg. At Barbara’s request, there will be no visitation. A graveside service will be held in the spring with details to be provided on the Funeral Home website. For those who wish, donations in Barbara’s memory can be made to Fishermen’s Memorial Hospital, St. John’s Anglican Church, the Lunenburg Foodbank, or a charity of the donor’s choice.

Online condolences may be placed by visiting www.sweenyfuneralhome.ca