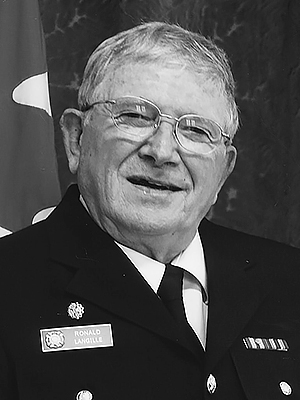 The family of Ronald Douglas Langille are saddened to announce his sudden peaceful passing at the age of 88. Born in Bridgewater he was the son of the late Harold and Bernice Langille.

Ronald spent his entire working career in commercial printing starting at The Bridgewater Bulletin and later, along with his father founded their own printing company Langille’s Print where he remained until retiring at age 70.

Ronald had many interests and was a very talented craftsman, building several travel trailers and homes for his family over the years. Ronald was an accomplished musician and played his Trombone in The Bridgewater Fire Department Band, joining at age 16 and remaining committed to the band for 66 years, retiring at the age of 82. Ronald was a member of the Bridgewater Fire Department and a founding member of the Hebbville Fire Department and remains an honorary member of both. Ronald was the recipient of The Fire Service Exemplary Service Medal, Nova Scotia Fire Service Long Service Medal, he was later awarded the Sovereign Medal for Volunteers.

Ronald was a lifelong member of The Bridgewater Baptist Church and served his church on various committees and as a deacon.

Ronald was a loving father and devoted husband and is survived by his wife of 66 years Joan (Whynot), his five children Wanda Ritchie (David), Carla Langille Crouse (Bruce), Gina Phinney (Harry), Derrick Langille and Linda Touche (Jeff), his seven grandchildren and one great-grandchild.

He is also survived by his sister Shirley Ann Sullivan (Donald) and was predeceased by his brother Glendon Langille.

A public graveside service was held on Friday, November 4 at Brookside Cemetery in Bridgewater. Donations may be made to the Lunenburg County VON.