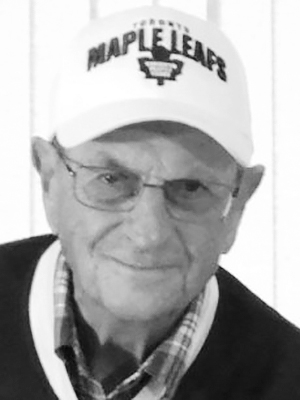 With heavy hearts, the family of William Sanford Rice announce the passing of a tremendous man.

After a very brief period of failing health, Bill passed away surrounded by his proud and loving family at the Saint John Regional Hospital on Wednesday, July 14, 2021. He was the last surviving member of his immediate family.

Bill was born in Sydney, Nova Scotia in 1925, a son of the late George and Irene (Gruchy) Rice.

Bill grew up and was educated in Brooklyn and Liverpool, Nova Scotia and was a veteran of WWII in the Canadian Army (New Brunswick North Shore Regiment) where he served in Canada, England and Continental Europe. After the war, in May of 1947, he met his future bride on a blind date and he and Margaret Hanes of Truro, Nova Scotia were later married and began a family. Bill started his career at Mersey Paper Co., in Liverpool as a Lab Tech and over the course of the next 17 years, he and Marg were blessed with their first four children; David, Beverly, Robert and Allan. In 1965 the family moved to Saint John where Bill had an opportunity to work for Rothesay Paper (now Irving Paper) as a Beater Engineer and also where the family grew with the addition of two more children; Jane and Greg. He retired from the paper mill in 1990 with 25 years of service.

Bill’s sport was baseball, some might even say it was his passion. In his day, he was a star centerfielder for the Liverpool Larrupers in the Halifax and District Semi-Pro League. He also played for the Liverpool Cubs when they won three Provincial and two Maritime Championships. He really enjoyed watching Pro Sports and his favorite teams were the Blue Jays and the Leafs. Bill had several adventures to Toronto over the years to see them play. He was also an avid curler and former member of the Thistle St. Andrews and Liverpool Curling Clubs. A big fan of the outdoors and nature, Bill enjoyed walking in Rockwood Park and tending to his flower gardens. He also enjoyed music and had a talent for painting. Bill was a life member of C.E.P. Local 907, the R.C.L. Branch 69 and a former member of the Citizen’s Coalition for Clean Air in Saint John.

Bill loved his family dearly and enjoyed time spent at little family get-togethers. He was strong and brave and lived in his own home seeing to his meals and caring for himself until these last few days of his full life. He will be forever loved and remembered by his children: David of Toronto; Bev Rice of Rothesay; Allan (Tracey) of Quispamsis; Jane Rice of East Saint John; and Greg (Shirley) of Quispamsis; his 10 grandchildren; seven great grandchildren with two more soon to be, and several extended family members.

Along with his loving wife Marg, Bill was predeceased by his son Robert; his infant granddaughter Elaine; his brother Howard (Emma) and sister Helen McKinnon (Ned).

Arrangements were under the care and direction of Fundy Funeral Home, 230 Westmorland Road (506-646-2424) where a brief visitation was held from 1 to 2 p.m. on Monday, July 19, immediately following the funeral service at 2:15 p.m. in the Fundy Funeral Home Chapel. The service can be viewed here:

In lieu of flowers, donations in memory of Bill can be made to the Cancer Society, CNIB, Salvation Army or the charity of choice.