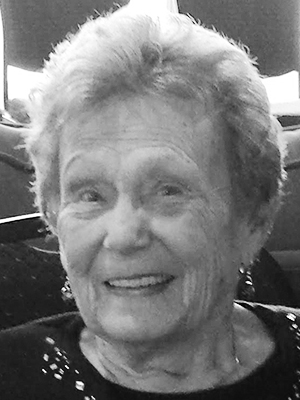 1925-2020 Queen Annapolisa XVI Doris passed away suddenly but peacefully November 28, 2020 in the South Shore Regional Hospital. Some of the various tributes to her in recent days include: “a sweet, refined, and lovely lady”, “remarkable”, “especially kind and sensitive”, “like a second mother”, “tough but gentle", “a pleasure to have had a chance to know her”, “stoic”, “great fun”, "a beautiful soul and a good friend”, “as a childhood friend, up for any adventure”, “a gentle nurse and a gentle listener", “one of the great ladies”, “sharp and beautiful until the end”. Doris had a sometimes difficult but adventuresome childhood. She was born to John Robert and Ethyl (Lane) Parr in the little Prairie town of Castor, AB; both sides of her family were early settlers. Her mother died when Doris was seven and she was largely brought up by her grandmothers and young aunt, Nan (Parr) MacDonald. Part of the time they lived in Seattle, travelling over the Rockies in a Model T. Her grandmother taught her to love spices before it was fashionable and to take on things like acrobatics. At 13 Doris moved to Middleton, NS where her father “Jack” Parr had established a business shipping horses from the west and where she acquired a wonderful new stepmother, Theresa (Sanford) Parr. She worked in Dr. Kelly’s surgery and that inspired her to become a nurse, training in the Royal Victoria Hospital in Montreal. Her father insisted first that she take a business diploma at Horton in Wolfville so she could always support herself. Doris nursed for special patients after coming home from Montreal. In 1948 she became Queen Annapolisa XVI, representing Middleton. That year she also met the love of her life, James Lincoln Nichols (1925-2012) from Deep Brook. Together they lived around Nova Scotia including Ship Harbour where they owned an outhouse, canoe, but no car. Those were perhaps the leanest but most fun years of their marriage. Fresh fish for breakfast from your own front yard. While being a very proud housekeeper and cook, she was always busy and probably nursed nearly all the family at some time. Doris volunteered at schools as a nurse, for her husband in the family businesses, for the Arthritis Society, and in church groups in her current home, including Bedford, Lower Sackville, Deep Brook, and Bridgewater. After moving to Bridgewater in 1987, she became a member of Kinettes; after being the first President of the new Kinettes group in Lower Sackville. She really enjoyed her days toll painting and china painting with ‘the girls” in Digby and Liverpool. Doris’ greatest love for 63 years was her husband Jim who died in 2012. On the Parr side, Doris was still close to her “adopted” cousins including her flower girl Joan (David) Coldwell, Wolfville; John (Joan) MacDonald, Bedford; Alan (Peggy) MacDonald, Sydney; Chris (Sharon) Roop and Carman (James) Balcom, Middleton, and Gleniss (Mervin) Shewchuck in Cochrane, AB. On the Nichols side Doris is survived by her daughter, Sue Nichols, UNB Professor Emerita, retired in Bridgewater. She also leaves her brother and sister-in-law Richard and Dianne (Frost) Nichols in Bridgewater, and her sister and brother-in-law Ruth (Nichols) and Ben Jensen in St. Thomas, ON. There are many other cousins, their children and grandchildren. She was predeceased by her sister-in-law Ellen (Nichols) McKinley in Yarmouth. Special thanks to all of the great caretakers she had, especially Fahie Mason (dec.); Christine Mullock; Carol Schleihauf; Beatrice (Bea) Slaunwhite; and Joan Campbell. Thanks to Dr. Marier (Bridgewater), Darlene Sanford (Lunenburg), Dr Wilson (Lunenburg), and Dr. Purdy (Halifax Dermitology Clinic) all who have performed small and large miracles over the years. And thanks to the VON who we often take for granted. There will be no visitation or service at this time. Arrangements have been entrusted to Sweeny’s Funeral Home, 35 York Street, Bridgewater. Memorial donations may be made to the Arthritis Society of Nova Scotia, The Castor and District Museum Society, or a charity of choice. Private internment will be in Bear River at a later date. Online condolences may be made by visiting www.sweenysfuneralhome.com.