Petite Riviere Vineyards is enjoying a business high, doubling in volume the amount of wine produced this year, and expanding operations that have successfully spilled over into the craft cider and beer markets.

The company has also been instrumental in helping to brand the Mighty Maroon Machine, the nickname given to the Canadian 5th Division -Atlantic Canada's division -during World War Two. And it is now selling a customized beer to army barracks and legions across the country.

According to Sean Sears, who, along with his wife Barbara Thomson, is co-owner of Petite Riviere Vineyards, this year's harvest was slightly more than double that of 2016, which he pegs as its previous best year.

"Our harvest last year from this past fall is likely to net us about 50,000 litres of juice, which is about 6,000 cases of wine," Sears told LighthouseNOW.

"It makes up for last year, with that frost," he said.

The volume necessitated redesigning the cellar at the winery on Italy Cross Road in Crousetown and adding about 15,000 litres of tank capacity.

The volume is due in part to a bigger yield off the winery's own vineyard. However, it also includes grapes from other South Shore vineyards.

"Everybody had a bigger yield," said Sears, adding that the company also brought on grapes from an Annapolis Valley farm, which its been working with since last year.

They've brought out a new wine this year, a red called Crescent Moon, as well as a red and white combination in honour of the Canadian Army's 5th Division, called Mighty Maroon.

According to Sears the request for the wine came in the fall from the former brigadier general of the division, Derek Macaulay. "He wanted to brand 5th Division and Mighty Maroon Machine. So we were part of that, aiding them in doing so. So we built a port, a white and a red. And in this past year, we built them a beer and a cider," says Sears. 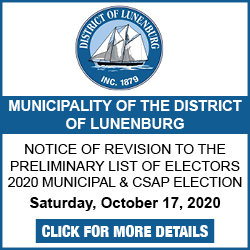 The blonde ale is available in NSLC stores under the name of The 5, and is touted as "The Official Beer of the Canadian 5th Division."

"And we sell that to messes and legions all over Canada," says Sears.

By the time Macaulay's request came in, Petite Riviere Vineyards were already producing craft cider under the name of ShipBuilders. That came about in 2012, after the winery bought the Annapolis Valley cidery, Stutz, the previous year, which Sears describes as "the original craft cider in Nova Scotia."

Petite Riviere Vineyards was able to entertain the beer request, having connected with Rebecca Atkinson of Sheet Harbour about four years ago via the Bridgewater-based incubator program, Mashup Lab. Sears acted as a mentor for Atkinson, who went on to own Sober Island Brewing Company. Sober Island worked with what Sears describes as the top 25 military officers of the Canadian army 5th Division, and they designed a custom beer, specifically designed for them.

"So it was kind of special. I said to everybody at the start, you know none of us will ever do this again. Sit in a room and design a beer with 25 people. And they had some real beer aficiandos, so it was quite an energized discussion." The process took four sessions over about four months.

Based at Three Mile Plains, just outside of Windsor, ShipBuilders has a capacity of 250,000 litres, roughly five times the volume of Petite Riviere Vineyards's winery. Sober Island is a much smaller operation, producing an English or Welsh style of stout beer. Its marquis product is an oyster stout, capitalizing on the oysters for which the actual Stout Island is famous.

The first collaborative product between the cidery and brewery was created a few years ago, however. It was a blend of cider and stout beer called Core and Keel. Sold privately, it was an "incredibly good product," with a "gigantic fan base," according to Sears. More recently, ShipBuilders produced a limited edition cider - O-Pomme-A - in honour of the recent visit to Halifax by former U.S. president Barack Obama.

Sears describes the company's expansion into cider and beer a natural progression.

"What it allows us to do is to go to a restaurant chain and say, 'I can sell you a cider, beer and wine from the same sales team. And service you more fully.' So that's a real advantage."

According to Sears, the company is "probably" the only one in Nova Scotia, if not Canada, that can do that.